I Went To Brittany Dawn Davis’ She Lives Freed Retreat


I talked to dozens of my fellow guests, none of whom wanted to be identified in an article, but they spoke about finding Davis on social media – either by seeking out a Christian presence online or stumbling upon her Reels on Instagram’s Explore page. Many said they were impressed by her bravery in posting about her faith. No one wanted to talk about Davis’s past.

Which surprised me, because their guiding religious text is loaded with reformed murderers (Moses and David), cheaters (Abraham), Christian-killers (Paul), playboys (much of the Old Testament), liars (Peter), and scammers (Matthew) ). That’s the whole thing about the Bible: Everyone sucks but Jesus. The bad things people have done become part of a redemption story that reflects the restorative love of God.

I opened the tiny bag of favors that were placed on my seat earlier, and a bracelet bearing the words “choose joy” fell out. Then it was time to sing and dance again. This type of Christianity is often described as “charismatic” or “Pentecostal” – denominations that place direct encounters with the Holy Spirit as a high priority. The women around me lifted their hands to the ceiling without hesitation. I came from more of a “stand politely and focus on the words” scene, but as a 15-year-old briefly went to a Pentecostal church when I dated the youth worship leader. He was 18 and played piano and sang with his band for hours until people in the audience spoke in tongues and fainted, and I was always devastated that those things didn’t happen to me, that I wasn’t chosen in this way.

Guests around me took off their shoes and knelt on pale pink Urban Outfitters cushions in front of the makeshift stage. Members of the “ministry” team (the event was not affiliated with a church) prayed with their hands over people. During lunch, a fellow attendee came over to me and said the Lord wanted her to speak with me. She invited me to her church, where people line up to get inside for hours before the service begins as if they were waiting for a concert to start.

And then I had my own version of a vision: Davis tapped me on the shoulder.

“I just wanted to make sure you were having a good time,” she told me. She knew exactly who I was, even if she had ignored every request for comment I’ve sent her.

And I was! Lots of beautiful women were complimenting me. Women were preaching instead of being banished to childcare and hospitality duties, in sharp contrast with many of the religious events I’ve attended in the past. I told her that I wanted to speak with her about her journey as a Christian influencer.

Under an enormous fan of fake eyelashes, her blue eyes remained locked on mine.

“Three years ago on Valentine’s Day, I tried to take my own life,” she said, smiling. Two days before the conference she posted a TikTok referencing it, the first time I had seen her say anything about suicidal ideation. But as she hinted that an interview would be unlikely, I submitted a stack of questions for her public Q&A panel instead.

Through anonymous notecards, I asked Davis to address the reason she never talks about her fitness scandal – “That’s not who I am anymore” – and share her feelings about being “canceled” online. “You can’t cancel what God has called,” she said to thunderous applause (I am sure we will see her tweet that soon). It makes sense that you would not want to talk to people who have paid you for something they saw on social media about another bunch of people who got pretty mad about something they saw on social media and paid you money for.

She also addressed questions about purity culture – suggesting setting physical boundaries with your boyfriend, never being alone together, and reminding yourself that without honoring God you won’t have good sex – and told the dozens of excited women that “sex is so good on your wedding night if you wait to have it. ”

Then Marines, the woman who had cautioned me about being a misbehaving journalist, took the microphone.

Someone had asked a question about how to tell if the voice in your head belongs to you or God. Pentecostals place an emphasis on the spiritual gifts of the Holy Spirit, like prophesying.

Marines said she had been overcome by the Holy Spirit and received a prophecy from God that a woman in the audience, at whom she pointed out, should start a business. That didn’t exactly answer the question, but not long after, a male member of the ministry team took the microphone and said God only tells us good things, like that we’re beautiful and that he loves us, which moved the crowd to another round of thunderous applause.

People had been grabbing me and saying God had a message for me all day – a young woman at the “affirmation station” and an older man who told me God said I didn’t have to tell people I’m a Christian and that I can let my work speak for itself. Another woman prayed over me, telling me that God wants me to make a decision soon and that I’d need to trust my gut, even though I make hundreds of decisions daily and find my instincts are usually wrong. They were all beautiful, vague things that were supposedly from God, for mebut could truthfully apply to anyone, like some kind of Christian horoscope.

It was also extremely similar to the kind of spirituality that is en vogue on TikTok right now, a mix of Christianity combined with New Age vibes, “manifesting,” and a large number of conspiracy theories.

Davis’s pivot to this brand of Christianity suddenly made sense. I had always wondered why she didn’t use her past as part of her message (Evangelical speak for “sales pitch”), and I realized that it wasn’t necessary. Davis’s posts about Christianity aren’t formal – she hasn’t attended seminary school and she only sometimes uses religious texts. It is more of an aesthetically pleasing guide to happiness that encourages supernatural encounters and affirmations. Her Christianity brand is digestible, social media – friendly, and easy to share with others, and the women I met seemed thrilled to share it with her.

Then Davis baptized about a dozen people in what she later confirmed on Instagram was a horse-feeding trough. Even more knelt in front of the stage to get “baptized in the spirit” and “receive their prayer language” (aka speak in an unintelligible tongue) before lining up for a dinner catered by Chipotle. I stayed in my seat, exhausted from 10 hours of smiling and swaying, hoping people would think I was praying and not slowly morphing into a tornado of swirling skepticism. 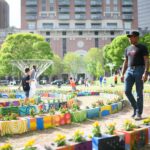 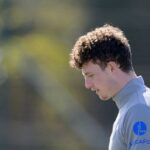