Providence, a Washington-based not-for-profit health system, is shrinking its executive team and streamlining some functions as it faces operational challenges.

Providence, with 52 hospitals, more than 900 clinics and almost 120,000 employees across seven states, is also consolidating leadership for its physician enterprise, ambulatory care network and clinical institutes into one team. Dr. David Kim, who oversees the physician enterprise business, will lead that team.

A spokesperson said the health system is primarily looking for internal candidates for other divisional leadership roles. She did not provide details on how many executives would be moved into new roles or leave the system.

Providence doubled its operating losses in 2021, compared with the previous year. In the first quarter, its operating expenses exceeded revenue by $510 million. It reported $330 million in non-operating losses, not including losses from ending its affiliation this year with Hoag, a California healthcare network. Hoag filed a lawsuit in 2020 to split from Providence, seeking to end a nearly decade-long partnership.

Providence continues to recruit frontline workers, including registered nurses, as part of a $220 million workforce investment announced last year to fund bonuses for employees and recruitment efforts, according to a news release. 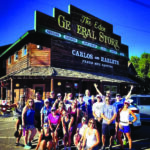